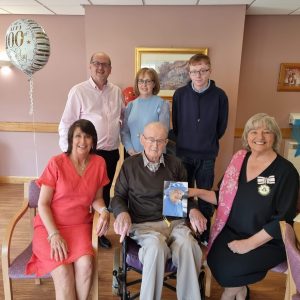 William Albert Watson (known as Bertie) was born in Londonderry 5.5.22, the second eldest of 4 children. His elder brother Deane is still alive – he’ll be 102 in August! His younger siblings both died recently. Bertie is currently in Brookmount (nursing care) and was delighted to receive his 100th birthday card from Her Majesty.

Bertie was educated at The Model Primary School and then the Technical College in Londonderry. In his early days he worked in the family druggist and paint store, and then moved to Robertsons Jam as a commercial traveller. In 1952 he married Dorothy Allen and they had 2 children, Lorna & Alan, and subsequently 2 grandchildren Jenny & Stephen and 1 great grandchild Sophie. When he left the commercial travelling he joined a coal business later moving to Lanes Coal, and subsequently went on to open their new venture Lanes Business Equipment, where he became a Director of Lanes Group, and there he remained until retirement.

Bertie was extremely gifted with his hands, always tackling DIY at home and when he retired he made 2 grandfather clocks and a writing bureau from kits and french polished them and even carved a rocking horse from rough-sawn timbers. It was a work of art, love & extreme patience!

Bertie and his late wife Dorothy enjoyed their caravan in Marble Hill, Donegal, where they loved walking, BBQing and Dad played golf with his brother. For many years he was an active member of Probus Club where he was President for a year and a very active member of Ebrington Presbyterian Church, where he served on several committees. Apart from DIY his interests were golf at Prehen and Greencastle Golf Clubs, and he loves classical music.

Mrs Lorraine Young DL and Mrs Leona Kane DL both attended his celebration on behalf of the Lord Lieutenant of the County Mrs Alison Millar.