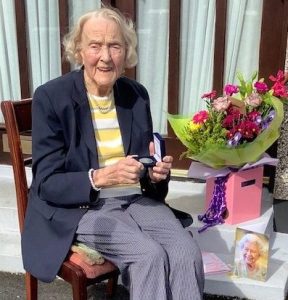 Originally from Belfast but now in Portstewart, Isabelle’s turned 100 on the 10th of April 2021. Her neighbours speak warmly of her kindness, saying she is a very caring person.

Isabelle cooked for Service Personnel in the Assembly in Belfast during the war. Her late husband Ronald”Jack” served in the radar section of the RAF. After the war he became a primary school teacher and later lectured in the University of Ulster. They lived in Fermanagh and then Preston. Isabelle supported him throughout his career.
Isabelle loved cooking and entertained many friends at home.