Who is the Lord-Lieutenant of County Londonderry? 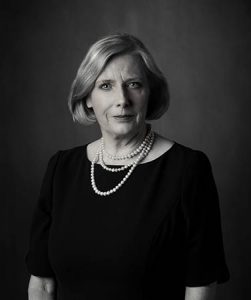 Mrs Alison Millar was appointed as Lord-Lieutenant of County Londonderry by Her Majesty Queen Elizabeth 11 on the 17th May 2018 succeeding Sir Denis Desmond KCVO CBE when he retired in early May 2018 after 18 years of service in the role.  Alison had been one of his Deputy Lieutenants since 2009.

Alison has lived and worked in the Coleraine area for over 40 years.  She was born in Banbridge and as her father worked in the Post Office administration it meant moving towns four times throughout the Province before she was 10 years old.  During that time she attended 5 different schools – the final one being Omagh Academy where she spent her most formative years.  This early history gave her an independent approach to life.

She studied Law at Queens in Belfast, graduating in 1974.  She gained a reputation in local Government and Commercial Law with the family firm of Solicitors Macaulay Wray in Coleraine (formerly Wray & Baxter).  She retired out of practice in 2017. She carried out part time judicial work for over 39 years and retired from that work in 2020.

Over the years she has worked with and supported organisations in education and local Government, not least as a special legal advisor in the governance of the now University of Ulster during the 1980’s and early 1990’s and the former Coleraine Borough Council from 1978 to 2015.  She was much involved in charity fundraising in the areas of education, health and sport. Her knowledge of the County is considerable.

Her Majesty the Queen approved the appointment and Honorary Commission of Mrs Millar as Honorary Colonel 152 (North Irish) Regiment the Royal Logistic Corps from 1st July 2021 to 1st July 2024.

Who is the Vice Lord-Lieutenant?

How is the administration of the Lieutenancy managed?

There is a Clerk’s Office.

It provides administrative support to the Lord-Lieutenant and offers assistance with the organisation of and protocol for Royal visits, the nomination procedures for National Honours, Royal Garden Parties, anniversary messages from His Majesty, ceremonial and special events.

What is the Role of a Deputy Lieutenant?

The Lord-Lieutenant is required to appoint a number of Deputy Lieutenants from across the County to assist her in the exercise of her duties. Their appointment is made at the discretion of the Lord-Lieutenant subject only to His Majesty not disapproving the granting of the Commission. Deputy Lieutenants are chosen for the contribution they make to the County through their work, charitable or voluntary activities.

There are presently fifteen Deputy Lieutenants for Co. Londonderry in addition to the Vice Lord-Lieutenant:

The normal retirement age is seventy-five.

What etiquette is involved when meeting and addressing the Lord-Lieutenant or her Deputies?

Mrs Millar has chosen not to wear a Uniform. She wears a Badge, which is shown on the Home page and her Vice Lord-Lieutenant and Deputy Lieutenants wear the Deputy Badge.

The correct form of address is as follows:

Conversation: [Name] should be initially addressed as “Lord-Lieutenant” and thereafter as “[Name]/[Maam]”

At other functions, the Lord-Lieutenant should be seated in the same place you would seat a member of the Royal Family: simply as the principal guest. Other issues relating to protocol and precedence can be clarified in consultation with the Lord-Lieutenant.

There is also an Order of Precedence as follows:

1. The Lord-Lieutenant of the County Mrs Millar and her husband Mr Alan Millar

2. The High Sheriff of the County

7. Justices of the Peace (where appropriate)

8. Chief Executive of the Council

How Can We Help?

If you think we can assist, please contact us. If we cannot help you, we may know someone who can.

HOW DO I APPLY FOR A 100TH/105TH BIRTHDAY CARD OR SIGNIFICANT WEDDING ANNIVERSARY CARD?

For many people, receiving a congratulatory card from His Majesty The King to mark a significant birthday or wedding anniversary is a very special part of their celebrations.

His Majesty will send a message of congratulations to an individual to celebrate their 100th and 105th birthdays and every year thereafter.

What is a Citizenship Ceremony?

In the United Kingdom of Great Britain and Northern Ireland the Home Office is responsible for granting British Citizenship and it does so only after the applicant satisfies a rigorous procedure. The last step in that procedure is the making of the Oath to the Sovereign and its Pledge of Citizenship. That Oath and Pledge is taken by the successful applicant either at Hillsborough Castle or at at Lagan Valley Island, The Head Offices of Lisburn and Castlereagh City Council, County Down. The ceremony will be conducted either by a Lord-Lieutenant or a nominated Deputy under authority from the Secretary of State for the Home Office.

New citizens are encouraged to bring their family or a close friend to witness the ceremony.

While the granting of citizenship is the responsibility of the Home Office, the presence of a Lord-Lieutenant or a Deputy Lieutenant, as His Majesty’s representative, demonstrates the importance of the role of the Monarchy in welcoming the new British Citizens to our community.

What are Honours and How Do I Nominate Someone?

The Order of the British Empire was instituted by King George V on 4 June 1917 and is conferred for important services rendered to the Crown.  The Order consists of the Sovereign, the Grand Master (presently vacant) and six classes as listed below. In 1918 the Order was divided into military and civil divisions.

The BEM medal was founded in 1917 and was awarded for “meritorious” actions by civilians or military personnel, although the recipients did not attend a Royal Investiture.
It was suspended in 1993 but in 2012, to coincide with Queen Elizabeth’s Diamond Jubilee the then Prime Minister, David Cameron, announced its revival and about 300 will be awarded annually to community volunteers.

For further information and guidance, go to:

Queen’s Award for Voluntary Service (QAVS). How do I nominate?

The Queen’s Award for Voluntary Service recognises exceptional work carried out by any voluntary organisation working in the community.  Any such organisation is eligible to be nominated but must demonstrate a very meaningful degree of success.

Recipients of the QAVS in County Londonderry over the last few years:

Riding for the Disabled at Castleroe, Coleraine

The procedure is similar to that for a personal nomination for National Honours. For further information and guidance, go to:

Queen’s Award for Enterprise. How does a business nominate?

There are four Queen’s Awards for Enterprise for organisations.

The Queen’s Awards for Enterprise are awards for outstanding achievement by UK businesses in the categories of:

These awards are valid for 5 years.

Organisations may nominate themselves.

The Awards Office has also produced a useful guide at:

Each year the closing date for entries in both categories is the end of September.  The winners are announced on 21st April the following year.

His Majesty The King makes the awards annually and they reflect the highest levels of excellence.  The awards are recognised worldwide and the winners receive a number of associated benefits internationally as a result.

Recent recipients of the Queen’s Award for Enterprise in County Londonderry:

The Workspace Group at Draperstown

What is the Elizabeth Cross?

The Elizabeth Cross is a posthumous award granted by the Crown, together with a Memorial Scroll, to the next of kin of service personnel who die on operations or as a result of terrorism.  It was the wish of Queen Elizabeth the Second that the Cross be presented to the next of kin by either the Lord-Lieutenant or a senior member of the Armed Forces, as the family desires.

This new award was first created in 2009 and is not just granted to families who have lost loved ones in recent conflicts in Afghanistan or Iraq but is available to the families of those who died in conflicts dating back to 1948 including the Korean War, the Falklands and Northern Ireland.  232 Cross and Memorial Scrolls have been issued to families of UDR CGC personnel whose deaths were officially attributed to their military service.

What is the Reserve Forces and Cadets Association Northern Ireland (RFCA NI)?

RFCA NI has close links with the 8 Lord-Lieutenants in Northern Ireland and one of their members serves as President, currently Viscount Brookeborough, Lord-Lieutenant of County Fermanagh, and the other 7 act as Vice-Presidents.

RFCA NI is required to draw its governing membership from local individuals who are qualified to act e.g., serving and retired Officers from the 3 Services (Army, Navy and Air Force), Councillors, local employees and employers, members of the Education Authority, civilians with an interest in the Reserves and Cadets etc. The common denominator is that they are all stakeholders within the reserve, cadet and veterans communities. In other words RFCA NI is an independent organisation rooted in the community charged with providing support to NI’s Reserves, Cadets and veterans as well as advising to the Defence Council and the MOD in relation to Defence interfaces in Northern Ireland. There are some 2000 Reservists and 5000 Cadets in NI. The RFCA also oversees the application of the Armed Forces covenant in NI and, in particular, co-ordinates support to Reservists.

RFCA NI is hugely effective in its role. For example, with a population of 3% of the UK whole, NI provides 7% of the national reserve and, at times, has provided over 20% of the UK’s reserve that has been deployed at any one time. These figures are remarkable.

The Lord-Lieutenants, as His Majesty the King’s representatives in their Counties and County Boroughs, act as a link between the Monarch, the Services and their local communities and the RFCA NI is a crucial facilitator to the Lord-Lieutenants in that role.

The link to the website for RFCA NI is https://www.reservesandcadetsni.org.uk

What is The Queen’s Commonwealth Trust?

Her Majesty The Queen the Second was deeply committed to The Commonwealth and was it’s patron. At the age of 21 she pledged her life of service. She was an example of leadership and huge encouragement to young leaders in The Commonwealth through her patronage of the Trust.

The Queen’s Commonwealth Trust helps young people lead transformational change in their communities, all around the world – in education, healthcare, employment, the environment and more. It does this through three key elements of flexible funding, practical tools and guidance, and a network of other like-minded young leaders: https://www.queenscommonwealthtrust.org. QCT’s Resources Hub is free to all young people and has some learning tools on leadership and social entrepreneurship: https://www.queenscommonwealthtrust.org/resources. Young leaders wanting to seek support and inspiration from others, can visit their website or follow them on social media: