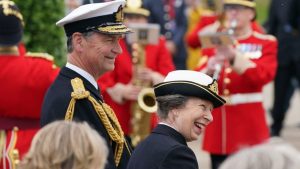 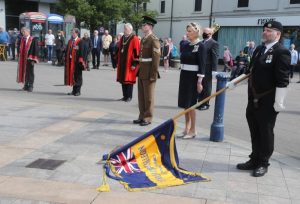 Across the UK events have been held to mark this year’s Armed Forces Day. Commemorations are held as a way to show support for the men and women who make up the Armed Forces community: from currently serving troops to Service families, veterans and cadets. Events included a gathering at the National Memorial Arboretum in Staffordshire attended by the Princess Royal and 100 service personal and their families.

In Coleraine the Causeway Coast and Glens Borough Council held a commemoration in the town centre and raised the special Armed Forces Day flag. It was also attended by representatives from the British Legion and by the Lord Lieutenant of the County supported by her newly appointed cadet Sergeant Joshua Durnin of the Irish Guards.

The Mayor, Councillor Richard Holmes, commented that it was an opportunity to remember the Borough’s proud connections with the Armed forces, making special mention of their contribution during the pandemic in their supporting role alongside our healthcare professionals. The Lord Lieutenant added that, “Our NI Reservists have been remarkable in their deployment both at home and more so overseas to fill gaps caused by the full time Services’ redeployment on frontline Covid duty.”

The Royal Family issued messages thanking the armed services for their efforts during the Covid-19 pandemic. “Since the start of the pandemic, our Armed Forces have been there to help the nation through the difficult times, from setting up Covid-19 testing sites to supporting the NHS by assisting ambulance workers. Thank you all for your service.”

The Mayor concluded, “The Armed Forces Day flag is now flying at Coleraine Town Hall as an important gesture of respect for all those who serve or have done so in the past.”