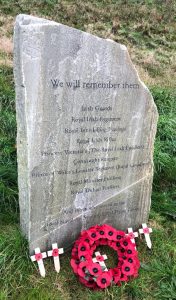 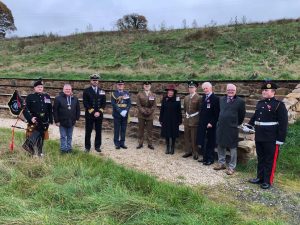 The Lord- Lieutenant was present at Brackfield First World War Memorial Wood on Saturday 13th November to lay a wreath on behalf of Her Majesty at the Stone naming all the Irish Regiments which served in the War. Representatives from the Armed Forces, Sir Denis Desmond former L-L and Director of The Woodland Trust and Patrick Cregg MBE Ambassador for the Woodland Trust were also present.

The Wood commemorates the 40000 service men and women from across the Island of Ireland who died serving in that War. Each death is marked by a tree and the Wood is owned and managed by the Woodland Trust.

152(North Irish) Regiment RLC was involved in the organisation and also supplied a Bugler and Piper. The Lord-Lieutenant is Honorary Colonel of the Regiment and was particularly proud to be in attendance. She described the Pipes sounding out on the bright clear afternoon across the River Faughan Valley made for a magnificent tribute in its own right