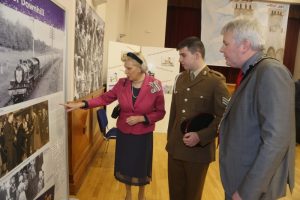 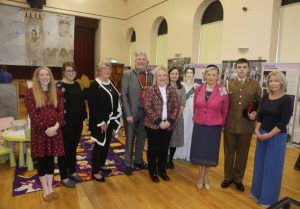 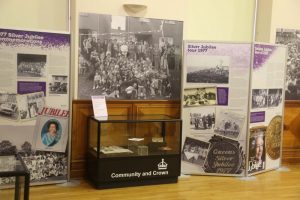 A fascinating new exhibition marking the Queen’s Platinum Jubilee has gone on display in Coleraine Museum at Coleraine Town Hall. The official opening on the 21st May was attended by the Lord Lieutenant for County Londonderry, Mrs Alison Millar, accompanied by her Cadet Bombardier Christopher Johnston of the Royal Artillery in Coleraine, Deputy Lieutenant, Lady Karen Girvan and the Mayor of Causeway Coast and Glens Borough Council, Councillor Richard Holmes.

The exhibition takes visitors on an historical journey through Queen Elizabeth II’s visits to Northern Ireland, as well as the momentous time she spent in Dublin in 2011. Through informative panels, objects, and photographs, the display reflects how the community celebrated the Queen’s Coronation and her visits to the Borough in 1953, 1977, 2007, 2014 and 2016. Visitors can listen to personal recollections at dedicated oral history stations, including memories shared by local residents and recorded as part of a Museum Services project, those voices and experiences give a special insight as we reflect on her 70 year reign during this Platinum Jubilee year.

Another innovative element is an inter-generational video, funded by the Northern Ireland Museums Council, which sees children from Ballymoney and Eglinton nurseries pose questions to residents of Cramsie Court in Ballymoney about the Queen’s visits through the years. Bunting made by over 300 primary school pupils will be added to the exhibition while a dedicated play area includes a themed dress-up box and colouring in for younger visitors.

Thanks to Eoin McConnell for the photographs

The exhibition is open until the 27th August 2022. Admission is free. Coleraine Town Hall is open Tuesday to Saturday, 11am to 4pm.