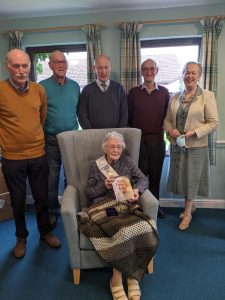 Moira was born in Dungiven and she and her twin sister were the oldest of a family of 5 girls. Unfortunately her twin and the next eldest have died but the younger 2 will be joining Moira for her 100th birthday celebrations. Her father ran a saw-mill at the foot of the town on the banks of the River Roe. In Moira’s early years she helped with the older generation living with them, she also did a bit of piano teaching before she married aged 21. She worked hard as a farmer’s wife, helping with the animals and planting and harvesting potatoes. She has 5 children (4 boys and a girl) all with her to see her reach this great age. Her husband passed away some 10 years ago.

Ever a keen plants-woman she and her husband had a great interest in gardening – so much so that their garden was open to the public on several occasions.