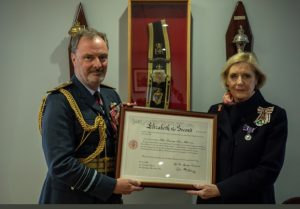 The Air Marshal was also present at the moving Service of Remembrance at Brackfield Wood, the WW1 Woodland Trust Memorial Wood to all of those who served in that war across the whole of Ireland. The Regiment asked him in particular to make the presentation to the Lord Lieutenant as she has connections with the RAF – her father was a Flight Lieutenant during WW2 with Coastal Command.

She is pictured at the presentation with the Pipe Major and Bugler of the Regiment who were also at Brackfield Wood which is situated on the banks of the Faughan and has been planted, by the Trust, with 1000s of indigenous trees over the last few years. The LL reminds us that “A Service is held every year at Brackfield on the Saturday before Remembrance Sunday, it’s such a special place where the sound of the ‘Last Post’ and then the Piper’s ‘Flowers of the Forest’ are quite haunting.