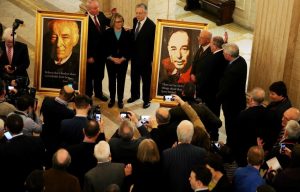 Our new High Sheriff is Mr Ross Wilson BEM. He is an artist and sculptor of international renown and a tireless charity fund raiser. He has been a visiting speaker at Harvard, Oxford and Cambridge and has paintings in The Prince of Wales Collection, indeed he has been the guest of the Prince and painted with him. Ross’s work, both paintings and sculptures, are highly acclaimed not least his portraits of Seamus Heaney and C S Lewis, the latter of whom Ross was commissioned to create a centenary sculpture which was set in East Belfast in 1998. It and the sculpture ‘The Alphabet Angel’, in Bushmills, a stunning piece of community art work which celebrates the importance of the Ulster Scots tongue to the local community are both personally important to him.

His cross community and conflict resolution work in Belfast and across the province is hugely important. At the heart of his community work is his belief that creative arts can provide opportunities for personal development and a more positive future for all but especially for disadvantaged young people.

At his inauguration, with his wife Liz, who is also an artist, he thanked the Lord Lieutenant, Mrs Alison Millar and Mayor of the Causeway Coast and Glens Borough Council, Sean Bateson, for hosting the event adding that he looks forward to his year as High Sheriff of County Londonderry. Ross and his family live near Culcrow in the townland of Aghadowey, close to where he grew up.

The out-going High Sheriff, Graham Mawhinney of Draperstown, wished Ross well saying how much he has enjoyed his year. Graham’s passion for history found him delving into the role of High Sheriff as far back as the early 1600’s. His year in office he showed his continuing commitment in helping promote the business and economic potential of his area, in particular Draperstown Workspace. His resolve resulted in a first time visit from Her Royal Highness Princess Anne. More information on that Royal visit can be found in our latest news page.