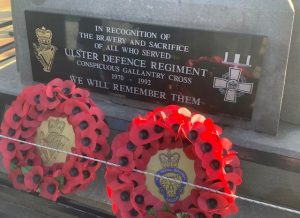 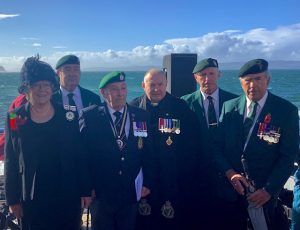 Unveiling of the Ulster Defence Regiment Plaque in Portstewart

In Belfast in October 2006 the late Queen Elizabeth ll presented the Ulster Defence Regiment with The Conspicuous Gallantry Cross. On that day the late Queen said of the men and women of the Regiment, “Your contribution to peace and stability in Northern Ireland is unique. Serving and living within the communities of the Province during the most difficult years of the violence, required uncommon courage and conviction. “The Regiment” she stated, “never flinched in what was often a climate of extreme personal intimidation. Success came at a terrible price – many gave their lives”.

The late Queen’s words resonated at a Royal British Legion Service of Dedication and unveiling at the War Memorial in Portstewart saying “Today you have cause to reflect on the fine achievements, while remembering the suffering.”

Lady Karen Girvan represented the Lord Lieutenant and told those present, “It is my privilege in the presence of you all to unveil this memorial to those who paid the supreme sacrifice.”